Fig 1 - Security Groups for a record

If you wish to alter the pass down Security Group from the default to another, then you can just edit the field, choose the sub tab option from the drop down list, and then edit the defaulted Security Group. You can remove the existing one or add to it if required.

Each Security Group has the option of rw/ro that you can allocate. For instance, you could have a Contract record with a Security Group of 'Legal (rw)' allocated, but you can adjust the Documents sub tab to have 'Legal (ro)', so they can only VIEW the Document records; not add or remove them. By adding more Security Groups, you are opening up the record to other Users.

When you are importing new Contracts or modifying existing contracts, it is also possible to set these Pass Down defaults, rather than manually changing record by record.  This means that you can preset all your records sub tab Security Groups before the records have been created. When they are created, they will inherit the Pass Down Security Group you have specified.

When you create a Import .csv file, there is now an extra column at the end next to the Security Group column, called 'Passed-down Security'.

The specific tab must be named first, and then the Security Group added within square brackets [ ]. The (ro/rw) identifier must also be stipulated, i.e. Contract Document [Legal (ro)].

To assign Security Groups to multiple tabs per record, you should enter the values in the column separated by a pipe | character.

Once you have completed your .csv file with your relevant Pass Down Security Group allocation, continue the Import process, mapping the new field as normal - any errors will be displayed during the validation process. 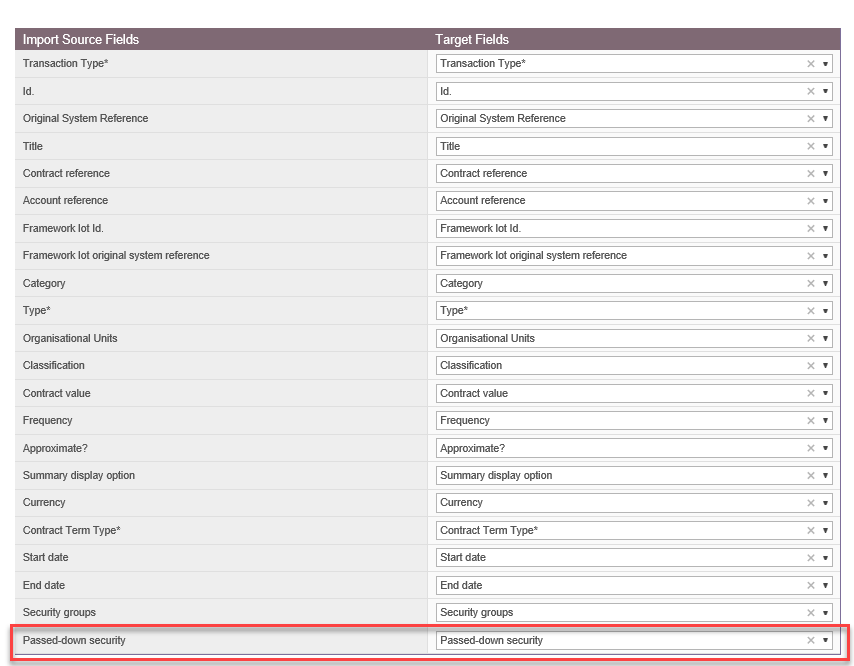