The intelligentcontract List functionality allows you to manually or automatically add multiple predefined Alerts, Tasks, or People records to a new or existing Contract or Party record in one action.

You can create a List of Alerts, Tasks, or People that can be applied to either all or specific Types of Contract or Party records. Instead of manually adding these records one by one, the List functionality allows the system to create them all in one action.

Alert List: Create multiple Alert Templates in a List that can be applied to a Contract or Party record

Task List: Create multiple Task Templates in a List that can be applied to a Contract or Party record

Contract Person List: Create a List of People with specific Contract Roles that can be applied to a Contract record

Select the option for the List that you wish to create. For this example, we will use 'Alert List'.

The List Summary View screen will display any existing Lists that you have created. To create a new List, press the [New] button on the top right to open up a new List record.

Give the List a 'Name' and select what feature the List should 'Apply To'. The current options within the drop down list are Contract and Party.

Save the List record, and tabs will appear at the bottom of the form. This is where you can now create all your specific List Templates. In the [Template] tab, press [New] to open up a new Template record.  The Template form displayed will differ depending on the List you are creating, and will reflect your current layout for Alerts, Tasks, and Contract People Links (including any Custom or mandatory fields).

Note: On a Task Template, you are able to enter either a finite or a 'relative' Expected Resolution date value.  the relative date will always be relative to the date the Task is created i.e. '3 weeks after creation'

Complete the Templates as you would normally create an Alert, Task, or Contract Person Link record. You can add attachments and can either nominate a specific Person or a Placeholder Role to the record.

Instead of tying a specific Person to an Alert or Task Template, you can select a Placeholder Role. This means that even if a Contract Person Role changes from one Person to another across the lifetime of a Contract, it will still trigger to the correct Person.

Click on the icon next to the magnifying Glass and it will turn green. The drop down list will then display your Contract Person Roles for you to select.

So for example, you can assign an Alert or Task to the Placeholder of 'Contract Manager', and whoever is linked to that Role at time of the trigger will be sent the Alert notification or assigned the Task.

For Alerts, this means that at the time in which the Alert is triggered, the system will link to the Person record that has been assigned that Role and trigger the Alert to them.  The Alert record will keep the Placeholder value, as it can be set to trigger in the future and the Role can change multiple time before triggering.

Multiple Placeholder Roles can be assigned to an Alert record. If more than one Person is assigned to the selected Role, then they will also receive the Alert notification.

With Tasks, you can assign a Placeholder value as the 'Assigned To' value, but as the Task is created it will immediately link the specific Person assigned to that Role, and replace the Placeholder value with their name in the Task record.

If you click on the first icon, it will by default add 'The Creator' as the Placeholder - when created, the 'Assigned To' person will be whoever created the record.

If you click the second icon then a drop down list will appear listing all your Person Roles values that can be selected as a Placeholder.

If multiple People have been assigned that Placeholder Role, when the Task is created, the 'Assigned To' value will be replaced with the first Person Record who is assigned this Role. The remainder will be assigned as 'Monitors', so they are notified of the Task.

When you create a new Contract or Party record, once the record is saved, the Alert, Task, and People tabs will be available at the bottom of the record.  To manually apply a List to the record, click on the relevant tab and press the [...] button to the right of the screen. Here you will see an option to apply a List.

When you select the option, a pop up will appear, allowing you to select the appropriate List to apply. You can select one or more Lists.  Once you click [Apply] the system will generate the required records and populate them in the tab. 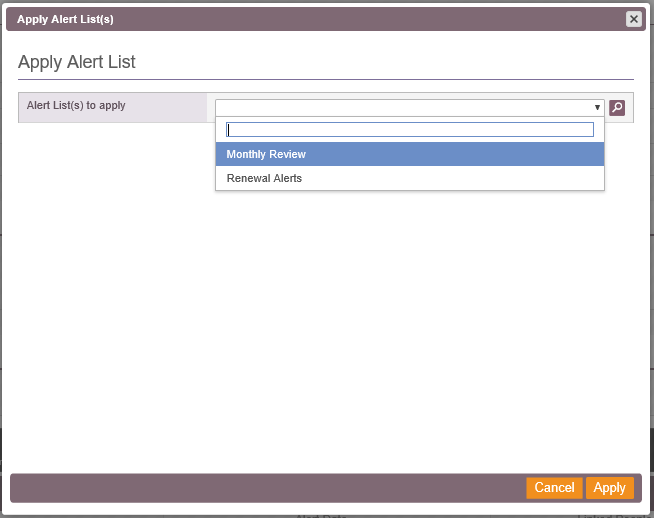 If for any reason the system cannot create a record, an error will appear informing you of the reason why. In the below example, the system was trying to create an Alert set to trigger 3 months before the Contract End Date. However, the Contract did not have an End Date, so the record could not be created. 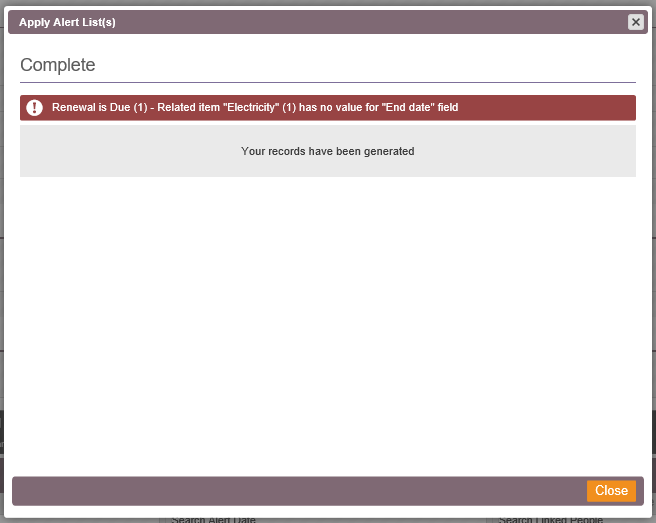 Manual creation of Alerts, Tasks, and People from Lists are all created as above, and can be created at any time during the life cycle of a Contract and Party Record.