Once your Rule has been created, you can specify what Actions are to take place when the Rule is triggered.  In the Action tab, press [New] to launch the Action pop up.

Select Type - this will display all the current actions available. Select 'Submit for Approval', and the field to the right will update its label based on the Type you have selected.

This screen is similar to the normal Approval Rule screen but in its basic form.

You will be able to create a Approval route to use. You also have the option to add the Approver as a Supervisor, or you can create a Sequential or Parallel Approval route.

TIP: Click here for further information about how to create the Approval record

If you wish to trigger multiple Actions for your Rule, click the new button again and add a new Action.  You can add as many different Actions as you wish.

Create all your Actions for your Rule. The below example applies to all Legal Type Contracts and will create specific Legal Contract People, Alerts, and Tasks when the Contract record is created.

Repeat until all your Rules and associated Actions have been created.

Note: People Link Actions must always be the first Action that the system generates. This is because Tasks and Alerts can be assigned to People and Roles. If you do not have people in place, then the system will not know who to assign Tasks and Alerts to if Roles have been specified.

Either make the People list Action the first in the list of actions or make it the highest Priority so this Action is always created first.

Logically the Approval Action should come last, so it is the final thing that is applied after a Contract is saved.

When you create a new record or edit an existing one that is within the Criteria of a Rule, the Actions will be automatically created when the record is [Saved].

A notification message will appear at the bottom of the screen informing you of the Rule that has been applied to the record. 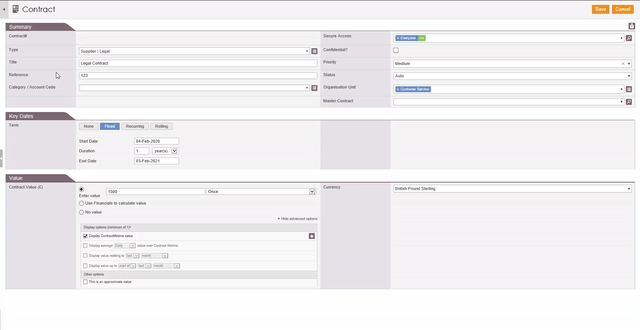